So, What Is This Thing Called Geocaching – Part II

(return to Part I

It all started many years ago with a navigational system known as GPS. Mainly used by the military for location and guidance it also had a part that did not have great accuracy, I think it was about 300′. But in 2001 the “Selective Availability was turned off and accuracies of better than 30′ were usable by the public. The Usenet newsgroup rec.satellite.nav had some discussion about using GPS for ‘sport’ ended up with Dave Ulmer hiding a 5-gallon bucket near Portland, Oregon, and posting the coördinates. Within a day or so someone replied that he’s found it. Within a week more started appearing across the US. Geocaching had begun.

Today with the Web life is simpler than Usenet, with cache listing sites that can be viewed not only on your home computer, but on hand-held devices, down to the size of a smartphone. Let’s go find a cache. 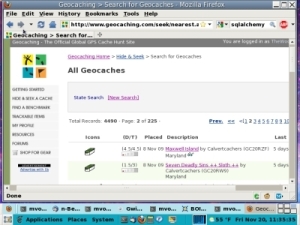 The first thing I’ll do is go online at Geocaching.Com and after logging in I’d select a likely cache. The one I’m using here was archived – that means it’s been removed from the databases as well as from the forest. The one I’m going to pick was known as Herman.

. What doesn’t show on the screen shot is the description which read

Am not sure of the significance of the name of this cache which is ~50ft off trail.

For the APLCachers bimonthly event, we planted caches rather than looked for finds. The caches were originally placed at Rocky Gorge but have been moved to Savage Park. All caches are just off the trail. This is one of seven that were planted – some are easy, some are hard.

That disn’t say much, and there were no hints. The coordinates were all I had to go on. And of course Google Maps did provide lots of help.

. Many times this is all the help we get, while some cache listings go into great detail. I like the hides in the woods with little or no help.

With my GPS loaded with the coördinates, and the map giving me the general area, in this case in one of the local parks. I headed out. 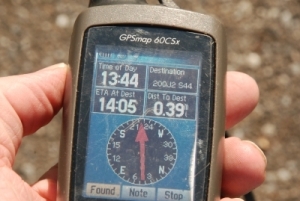 As I get out of my car I find that the cache is 0.39-miles into the park. This is nice, the first quarter-mile or so is a well-worn path.

. I’m going to skip ahead till the GPS says I’m just a few feet from “GZ (Ground Zero). Most of the time this is not where the cache is, but pretty close. There are errors in the GPS that was used when the cache was hidden, there are errors in mine, and signal bounce off trees, buildings, and any number of other things. They all cause problems. By the time I near the cache the path was covered with leaves, You might be able to tell I was out during late November in 2009. After the GPS lead me off the path

into this field of leaves I kept following its directions until it basically said I had arrived. Now is when the real search begins. At first this looks like a hopeless task, but with a little experience one learns to be methodical and look throughly. 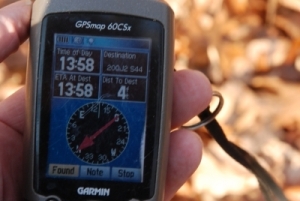 when searching. Many times in a setting like this, a cache will be hidden near the base of a tree, or under a fallen log. This time it was hidden under a rock and covered with leaves. 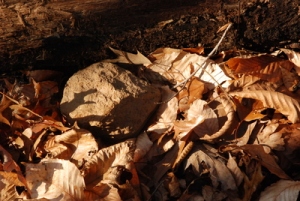 This time the cache was a small “Lock-n-Lockl” plastic box. It contained a log book, and a couple of items that can be traded. Small toys in caches help make caching into a fun activity and a reason to go out for a hike with mom and dad.

Now was the time to sign the log, and hide the cache back in the same spot, and follow the GPS back to the car. Another successful day of caching, and an hour spent in the outdoors. Why so long – I found more to take photos of, an although the day was cool, it was nice to get away from everything around the house that thought it needed doing.

(return to Part I